Some People are just Scum

CCHR, a scientology front group whose entire propose is to push it’s own propaganda to attack the mental health industry. The claims they make against the field of psychiatry is that it is responsible for all the wrongs in mankind blaming them for the holocaust, 9/11 claiming Ayman al-Zawahiri was a psychiatrist when in reality he was a surgeon, and the African slave trade. To bad the field of psychiatry didn’t exist till the 1800’s which was long after the African slave trade had begin. Silly scientologists, so dishonest.

While I was on my way to see the duck on sunday I happened upon this billboard and became kind of irritated because it seems they are claiming the use of medications is what is driving people to die. First of all, I’m guessing they believe going to war, killing and watching your friends get killed isn’t going to take a psychological toll on you. Though I do agree, medications don’t always work out for everyone and there are some cases of side effects, sometimes they can be pretty bad. But are you really going to tell everyone it’s all bad for you when in most cases it does work? Plus there seems to be an inconstancy with scientology when they attack the pharmaceutical industry for making products like Zoloft which is an antidepressant, yet seem to be silent on drugs like Viagra which are both made by the same company. 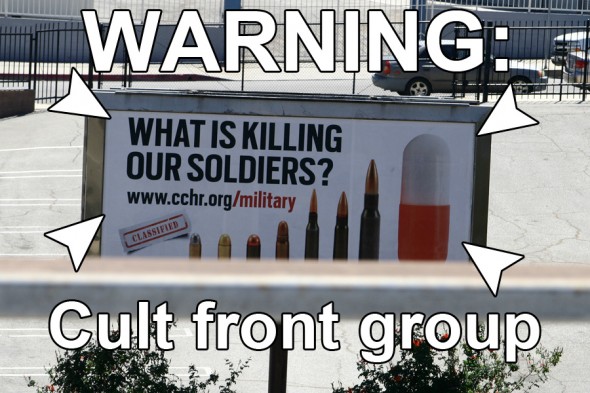