Rant time. So as we all know the issue when it comes to abortion has always been relatively hot. People on one side taking about protecting life, while others believe it’s the women that has the right to choose and want it legal to prevent the potential return of back alley abortions. Personally I side with the Pro-Choice people because you can’t force a women to carry a baby to term if she doesn’t want to, and most people on the Pro-Life side are willing to make a woman carry it even in the cases of rape and incest. Now as some people know in the state of Texas there has been a battle going on on the issue and there have been protesters shouting out their feeling and holding signs.

One sign was held by a 14 year old girl saying “JESUS ISN’T A DICK SO KEEP HIM OUT OF MY VAGINA!” The reason behind it has to do with the fact those people who are against abortion the most use their religious beliefs as a basis to set laws on which completely goes against separation of church and state. And with no surprise the pro-life people who believe they are following the teaching of their Jesus about love and not judging others, started calling this person they know nothing about a slut, whore, and various other similar terms. Now personally I wouldn’t call anyone a slut or whore unless it was with one of my friends and we are messing around with each other, or it would be some known female figure that would be offended by being called such a thing like Maggie Gallagher of NOM saying something insanely stupid, like claiming the nazis were gay when they in fact killed gay people.

Something else I’ve noticed is that many pro-life leaders also happen to be people against the use of birth control. I don’t understand, encouraging the use of things like condoms and the pill can actually bring down the number of abortions, and they don’t like it for what reason? Although some people claim they want it to be used they also say it’s wrong because it will make women want to have more sex. So? thats bad? Before birth control women already were having sex and just because someone is using birth control doesn’t mean they will be having it more often, it just means the likeliness of pregnancy is going to drop. Basically these people are or happen to be listening to idiots and it seems this is how they are envisioning things when women are using birth control. 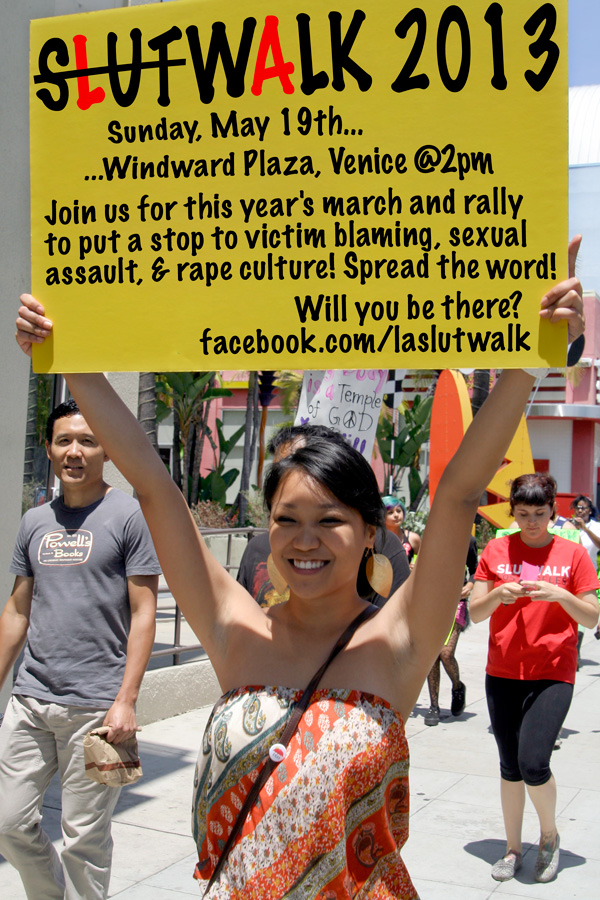 I was bored and being lazy, so I just changed the time and place form the the flyer I made last year. 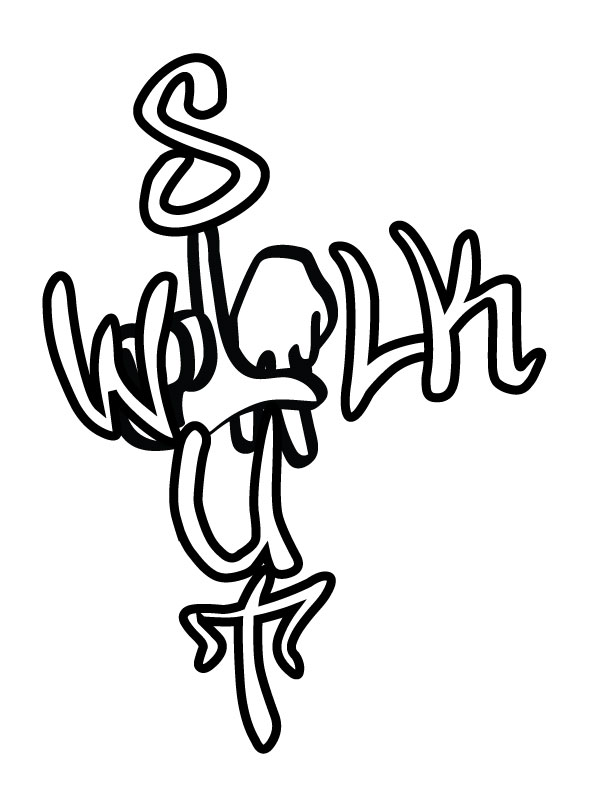 I remember someone on the facebook page asking for some designs for a shirt to be printed for a coming slutwalk event in the area. So I made this and posted it up but never heard anything about if it will be used or not, let alone come across any other designs. Whatever. 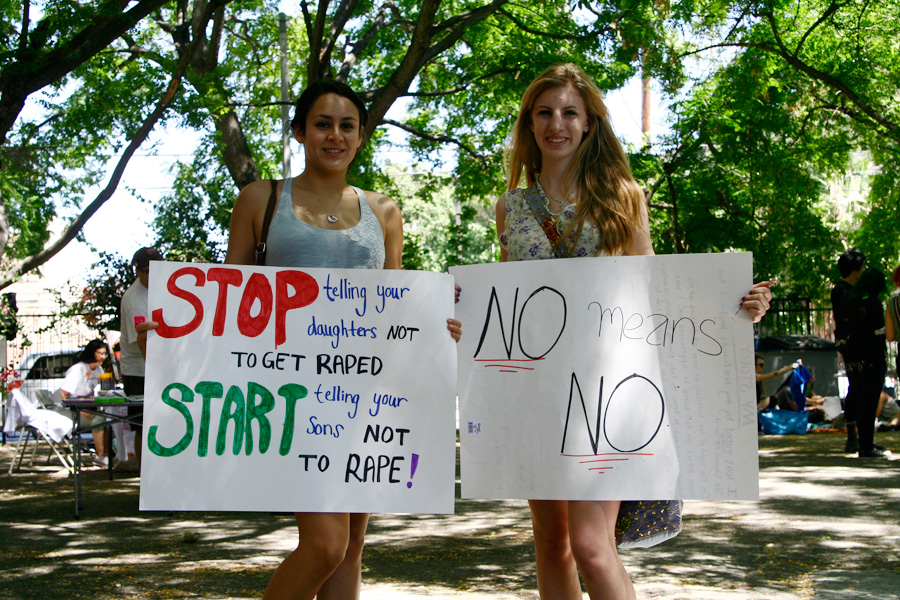 Story time. So day started off with me, of course heading over to the event. Got off of the subway, walked down the street, late, and didn’t really notice anyone where I thought they would be at all. Turns out during the day they moved it again. Lame. So I saw some people also heading down with a sign whom I also remember seeing last year when we were in West Hollywood and they told me it was just a little further down the street at this studio right next to the Chick-Fil-A I was at the other day. So everyone was hanging just in the parking lot or inside where there was a guy giving a self-defense demo and soon after we started the walk.

So the walk, we started on Sunset and Highland, walked to La Brea, then up to Hollywood back to Highland and back to where we started. Awesome. People making all kinds of chants, me saying a few strange, yet funny things. Maybe the highlight of that was the little girls along Hollywood also repeating some of the chants. See what we do to todays kids? we corrupt them. So we get back, hang in the parking lot some more and inside was two bands playing. They were alright, but not really to my interest. But over all, it was all good.

For some strange reason there was a problem with Pershing Square, not sure what but now it’s being moved. Here is the updated info. 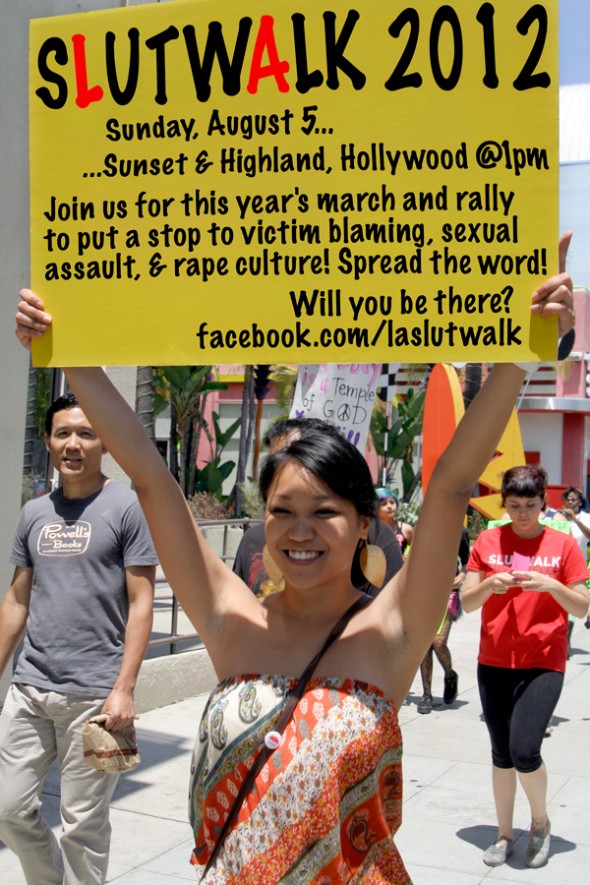 Updated info, see post above Here is the event page

this is not from me, but a guy i know that i’m posting this on because i happen to be in it. if anyone else that was there wants me to link yours photos or whatever just post a link on the comments and i’ll post it. 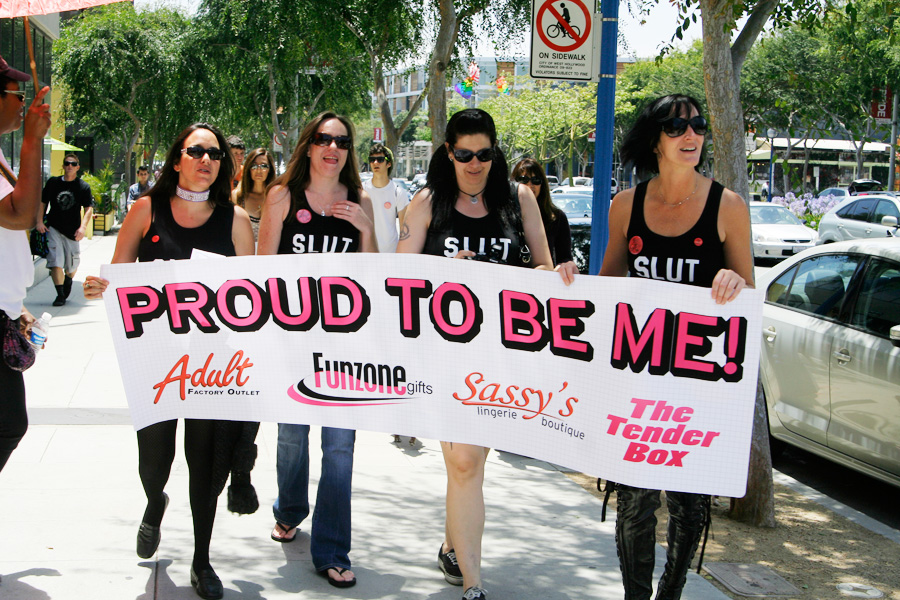 alright, here they are. i got there an 1 after the event started officially and had a little trouble finding it at first but i still made it. we walked along part of santa monica blvd then back to the main area the event started, played some music, people danced around and took photos of each other, and lots of people dressed very awesome! good times.

what in this world can be better then a slut?