Trying to Figure this out 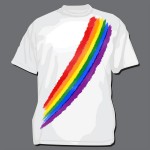 While trying to figure out what to wear on my plan to goto San Diego Pride, before it was a bust. I felt that I needed a new shirt that showed my support to the community as an ally, but is displays a certain harshness, for the next time I decide to go. What came to mind was spray paint across the front of the shirt, so I made the design in photoshop, got a templet image of a shirt to test out what I wanted and had this in mind. Yeah, it was going to take up a lot of the shirt, but that’s what I wanted. It would be kind of look like a sash. 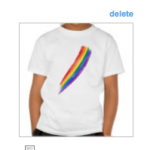 So then I felt it was ready, put it on my typical site, zazzle, and it looked like this. The image on the shirt takes so little area, I can’t deal with that. One idea I was give was make the image bigger, it was already kind go huge but ok, make it bigger and see if there is any kind of effect. Nope, none what so ever. What can I do? So did not expect this problem. 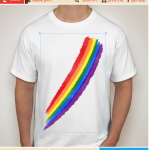 Asking around if anyone knows any sites that will let post it up allowing the image to take up more space I was informed of custom ink, tested that an this is the biggest I can get. Much better but I still think it’s not enough. I’ll figure something out.