The Stupid, it Burns

So yesterday I saw this image on Facebook of Ronald Reagan with added text, and to no surprise knew there would be people commenting in agreement without question. Though, while looking at the “quote” I thought to myself Reagan could not of been stupid enough to say something like this. And as much as I would hate to post a link to CNS, I don’t have a choice because it’s the only place I know of with this video. Basically saying, yes, he was stupid enough to say something like that. Disappointing. Well if old Ronnie knew what the Defining Characteristics Of Fascism were, he might of noticed he was wrong. But I don’t know if he would care, nor do I believe the people that seem to worship him would either.

People are going to believe what they want to and find ways to do so, and that’s kind of a problem because stupidity and fear mongering spread much faster and some people don’t care to do any fact checking. Come on everyone, it’s not that hard. 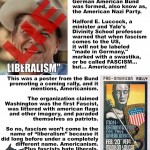