Somtime last year this video came out and was put online, we all had our laughs. but scientology is not something that likes to be joked about, in fact they will do about anything they can to ruin you just for being critical of them. even to the lengths of creating false bomb threats in your name, they done this before a few times.

so after they threated to sue youtube and others the internet became angry someone would do that, and then we started learning more and more what scientology was really about, that it was in fact a real life criminal organization. after getting a few wise words from long time critic Mark Bunker, we had our first protest. here are my photos from that day on Feb. 10th 2008 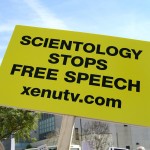