sirevil classic: I mean like, really old photoshop of mine. not a whole lot I did, I just wanted to find the largest pic of this guy I could at the time and this was it. at the time Dell was having these ads with this guy in it say “dude your getting a dell” and it annoyed most of the planet… so I heard.

so me being me I remade like this, and had to custom make the H which wasn’t hard really. and then added the flame effect to the letters. 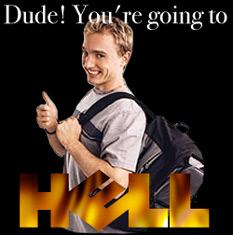