So a friend of mine found this webcomic and noticed the word “Steel Shark” being used in it and thought of me. So I read the comic and found this interesting. The person that created it gave herself the pen-name as she calls it (others would call it user/code/screen name, handle, and I’m sure many more things), AceroTiburon, would translates to Steel Shark in spanish. I’m sure I’ve been using the name longer anyways. Back when I made the first logo was late 2001 or early ’02 and the current version I use now I drew out in 2007. Also whats makes things more sad to me is she seems more likable. Also I drew a version of myself, camera, fire ball in hand, hair growing out like mad again, and all in her comic style, because I can. Or are least as close as I can, try a little taller and skinnier looking. Any who, check her site out. 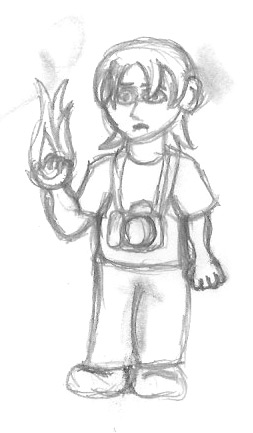