A month after the protest on feb 10th, protesters come out again to party just 2 days after founder L. Ron Hubbard’s birthday. and every month after that anonymous delivers with another protest against scientology.

A week later I was found and threatened to stop protesting or I would be sued… thats when I decided I’m in to bring scientology down. 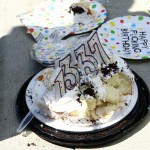