Was a good Raid we had, lots of scientologist walking by not happy with the fact we happened to be there. I took a few photos and yelled my usual “Hubbard died on psychs drugs,” “Hubbard was a fugitive in several counties,” and “Scientology, convicted of fraud.”

It’s all there, and of course they all call me a liar. One scientologist was starting to cross the street when it didn’t say walk and I tried to get her out of it so a car won’t hit her, then flipped out in a very strange way. I was also flipped off (they do that a lot), and apparently one girl was hit in the stomach by another scientologist. I don’t know the whole story on that and might be video. 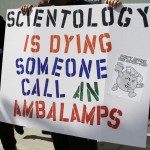